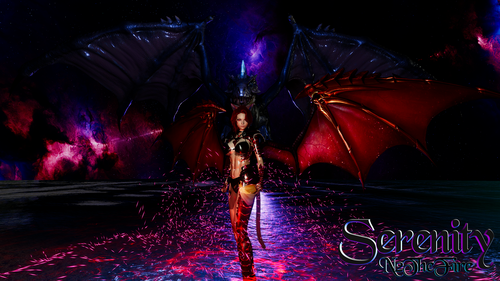 Well, here we are finally... A bit later than I wanted to be but that's okay. Last Human's first episode is out in beta, and now it's time to return to Serenity! So, let's get started...

What can we expect in Episode 2? - In Serenity Chapter 2, Episode 2, we have a few tasks left waiting for us. For one, there is the double date with Lili and Triss. This will happen near the end of the episode. Then there is the arena. The girls need a place to cut loose and really show us their powers. As you saw in Episode 1, MC has someone on standby, hidden away from the girls. Only he and Mom know about her for now. Imagine Rin's reaction when she meets her again! Especially when they find out she seems to have a strong affection for MC (Kat also won't like that too much!)

Arena sessions are going to focus on a particular girl in each episode. And this one will of course be Rin. How far will Marissa be able to push Rin's anger? Perhaps bring out her fury or even all of it with her dragon too. In Episode 2, you're going to learn a lot more about Rin, her power, and just what she is capable of. It is going to be pretty damn cool; I think you guys are really going to have fun reading this one.

When will it be released? As I always say... "when it's done". I am shooting for having this thing completed within 2 months from now. However, that may not be possible with the work I am putting on myself for this episode. I really want this to be one of my best Serenity updates so far. And what I have in store will require quite a bit of extra graphic work. If this thing works out the way I am hoping it will, all of my current Serenity fans will be extremely pleased.

Planned content: LH episode 1 has around 1100 images. As you're well aware, I try to have one image for every 1 to 2 lines of dialogue. I want to have somewhere between 1200 and 1400 images for Serenity C2 E2. So, more content. I hate to give you too short an episode because it goes by too fast. Just when it gets fun, it seems to end. I'm trying to do better with that. Aside from the number of images, I have plenty more music that will be in the episode. Some will be used from previous updates - this is inevitable... as there is a finite number of songs I can find that I like enough to use. So, recycling some of the better music is the best way to avoid running out.

Changes to graphics and characters: I have been upgrading all of the Serenity girls with newer skin. Also, I have been working on each of their hairstyles, clothing, as well as tweaking their faces. Way back when I first created these girls, I didn't know as much about creating faces. No, you won't see any drastic changes (Rin will still look like Rin - or she would kick my ass). Just refreshing them and preparing them for the newer graphics settings I used for Last Human.

Final notes: I wanted to address some confusion some people seem to have about my games. I have 3 separate game:

These are SEPARATE games. You do NOT need to install one over another. When you finish Serenity Chapter 1, grab Serenity Chapter 2 and install it in a separate folder. When I release updates, I will have 2 download choices: 1 file that is the full game so far with current content added... and another file that will contain only the new content that you can add to your current installation as long as you have the last publicly released version. Most devs for these games do this... offer an "update only" file that you simply extract to your game folder. It makes it easier for people to download.

If you ever have a question about this, please ask me or one of my followers. I have quite a crew of Faithfuls who know how it all works. Join my Discord and ask there!

Call me a pervert, but seeing how we're going to see a lot of Rin in episode 2, I hope the promised lewd scene with a super tall dragon-cat girl is in the plans... y'know, for research purposes...