Last Human now has a place on itch! 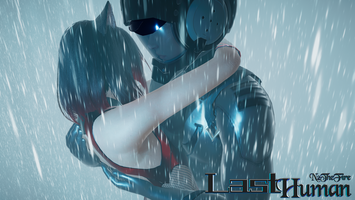 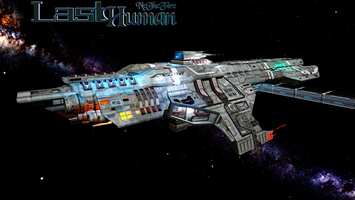 Page is now up, and I will be posting devlogs/updates here as well as on Patreon and SubscribeStar. Below is the devlog I posted today on those pages so that you're up to speed on what's going on...

Today I'm releasing a couple of images previously shared with patrons, and one that no one has seen yet.

First image: Introducing the crew of the Aurora. From left to right: Alaina, Dezzy, Alexis, Natalie, and Kalina.

Second image: Starship Aurora. Armored in an exotic metal called Diranium (invented by Dr. Trent), the Aurora was built mostly by thousands of nanobots. It began as an international project - as the human race were facing the possibility of a 'world-ending' event caused by an asteroid collision on the moon. The Aurora was built to be extremely durable. To ensure proper operations onboard, an AI was added (Aurora herself, or "Aury"). Its original purpose was to explore the universe and search for other 'earth-like' planets for possible migration. Ultimately, Dr. Trent's son (the MC) would take command of the ship in a bid to escape the dying planet, as the Last Human from Earth.

Last image: Captain Trent (you, the MC) rescuing a Neko from the brutal cold while still on Earth.

What you see here is, of course, still a work in progress. Some of these images will be used soon to setup the Last Human itch page. As I've said in past posts about LH, what I'm going for here is a sci-fi (with adult content) VN series that I hope will become my main project once Serenity is completed. That all depends on you guys of course... How well it is received. If I suck at this, then I'll stick with my 'bread and butter', Serenity. But if people like it and want it to continue, then I'll continue to do Serenity updates, and Last Human updates (back and forth).

Serenity Chapter 2: For those who haven't kept up, Episode 1 was released and is available free from my Patreon page (here) as well as itch (here). Serenity Chapter 2 is a separate game. You do not need to have Chapter 1 or its 'saves' in order to play it. But you should play C1 before starting it since it is a kinetic novel. Episode 2 development will begin once Last Human's first release is out. No release date has been set yet.

Last Human Episode 1 progress: I've had my hands full on this one. It's a big project and I started from scratch... with nothing. I have managed to collect and import new assets never seen from an HS2 game (as of this post). The Aurora ship is an example. There have been many maps I've needed to create completely by hand due to a lack of assets out there (and I don't know how to make them myself). But I've done well to create what I have so far, and I think you will all be pleased. So, I've had to get a little creative with this one. With that said, I am currently about 10% of the way into the main story renders. Coding, GUI/interface, and dialogue are all done. We're just doing renders now, then add music, etc. I cannot say exactly when a release might happen. I would really love to have this done by my birthday on July 28th. We'll see though; there is a lot of work to do and a lot more 'map-making'. The good news is that once most of these hand-made maps/scenes are completed and saved, future updates should come a bit quicker. Creating those takes a lot of time!

That's all I have for right now. Patrons can look for the July desktop background at the beginning of next month (those go public one month later). I should have the itch page for LH up soon and will share that when it happens.

Meanwhile, be sure to check out a few of my favorite games from friends of mine. These guys are like fam to me. They're always around to help each other and give each other shit over our work. Peer pressure can be a bitch in the AVN community LOL. If you haven't played some of these, go do it...

Lykanz - (NOT) The Inn - This crazy dude actually makes an awesome and sexy game. Definitely check it out!

Caribdis - Eternum - Amazing and talented developer with one game (Once in a Lifetime) already completed. Check out that game and also his current project, Eternum.

Story Anon - Out of Touch - A true writer, this guy. And OOT is a fun and entertaining ride. Check out his latest public post here.

Stronkboi - Tales of Unity - Give Stronk some love and check out Tales of Unity, a great monster-girl AVN with an interesting story.

I hope to someday be on the same level with these guys. They are amazing devs!

A starship full of Nekos... Exploring the universe together...

The girls look somewhat similar to the nekos from Serenity, especially Natalie and Kalina who both remind me of Lena and Rin respectively.

I personally have always liked  when there are similarities between characters from one game and another, it brings this weird feeling of familiarity. I noticed some subtle changes in the looks of the girls in Serenity (or there were none and I'm just dumb), but I do hope these are the final designs of the nekos here in LH.

I love and play all of your recommendations! And obviously, I'm here because of Serenity! I'll keep a close eye on Last Human! Good luck!