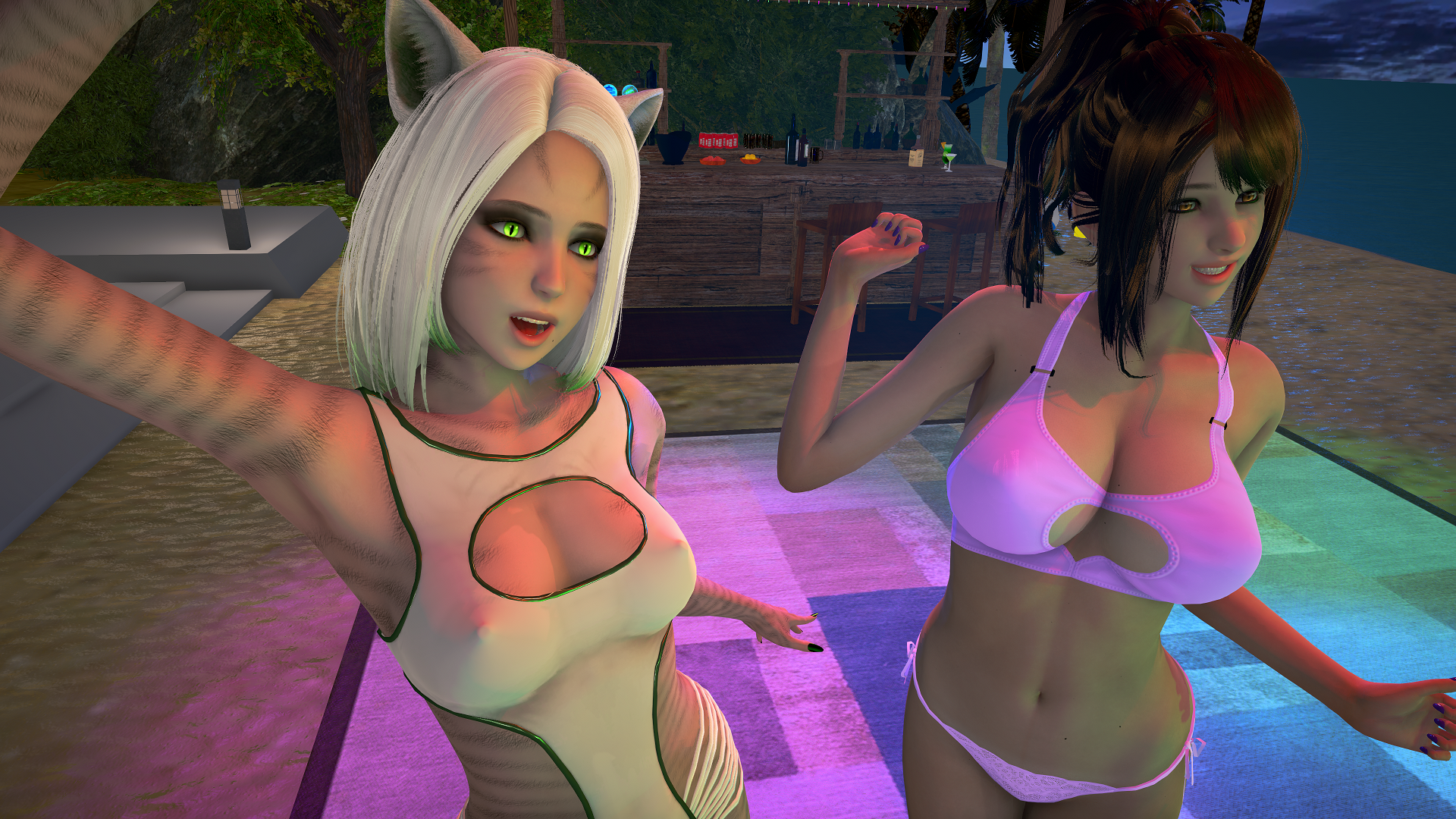 It's been a long weekend. I got a lot done on this new chapter of Serenity in the first episode. The good news is that I only have about 30 renders left to make. Then I will be proofing and adding music, build my test game, and play it. Then release time for Fade Goddess tier and above. Within the next few days, I should have a completed release schedule for you guys. This thing will be ready this week! Long post here, so let's get started...

I've been DM'd with various questions here and there. I'll try to cover a few of them... First one: Will you put Serenity up on Steam? The quick answer is 'no'. I thought about it and looked into the process. Even spoke to a few devs that have done that. Honestly, it takes a little investment to get started with Steam as a dev and I think I would prefer to do something like that with Last Human. Although Serenity is getting so much love from way more people than I imagined (thank you so much for that), it would need a lot of polishing to get on Steam. And honestly, I'd prefer to put that effort into Last Human. Serenity was my 'training' in every way. 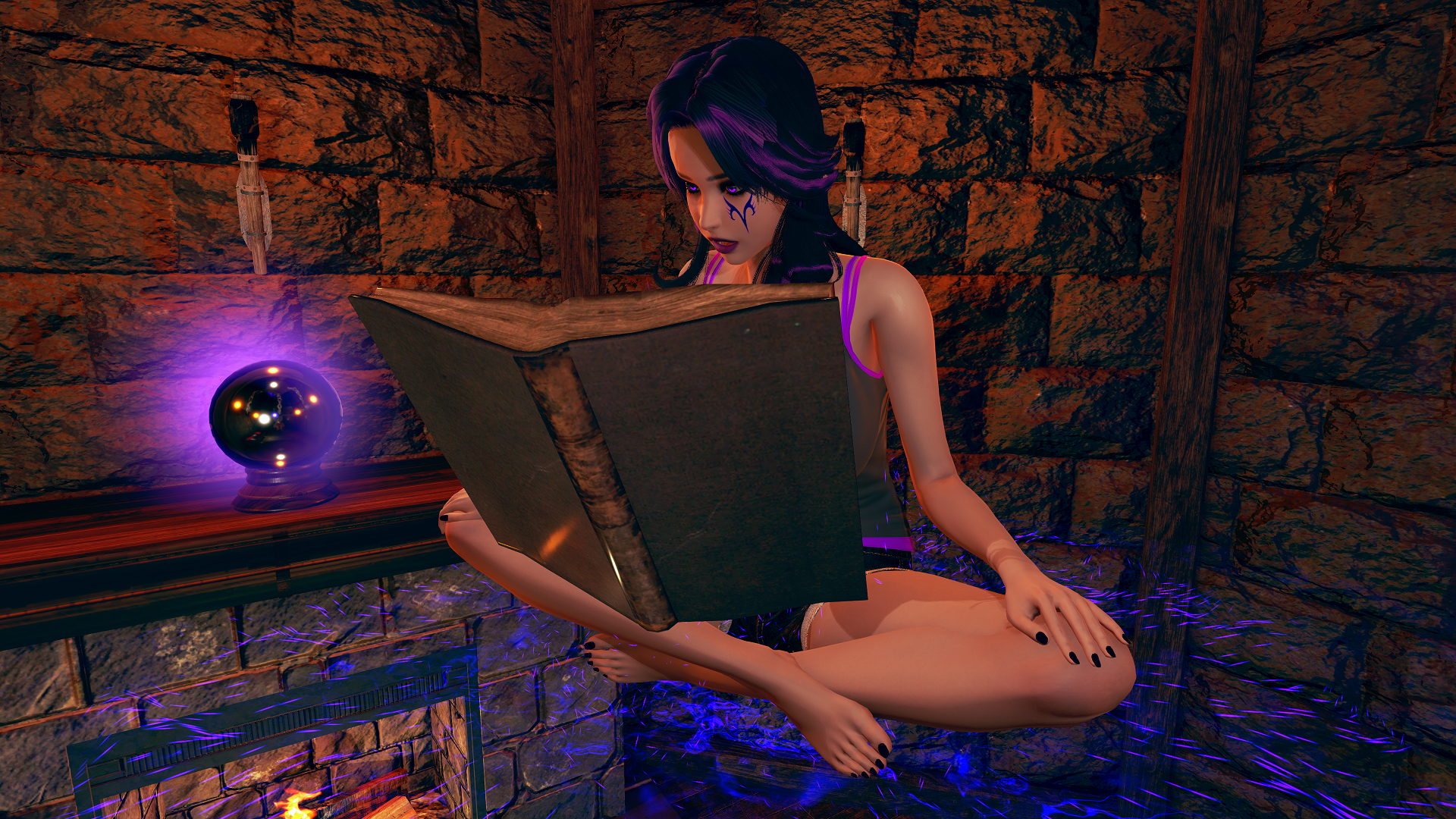 What's happening with Camilla? I get this one a lot. Everyone loves her (I do too). She has a dark past and an interesting story that I think will be worth exploring. As for what is happening with her... You'll start to see that in episode 1. As we already know, Camilla is destined to 'write' her own dream world. And she'll be taking a couple of the girls with her. Don't worry, there will still be events with her in C2.

Will we see more story about Dad? Another one I get asked a lot, and I've seen comments mentioned in reviews and other places. Demitre definitely has a part to play later on down the storyline. There are still things we need to learn about him. MC patching things up with him; Cammie patching things up with him perhaps? I'm considering some "past events" where we see just what Camilla did because of him. As well, we may even see Trixy and Mia's arrival to the shade world and Demitre's castle. I haven't decided yet how I'll write it, but these are definitely options I have in my story outlines for C2.

What is Chapter 2 about? What will be different? Um, you'll find out shortly! LOL... Seriously though: Episode 1 will be a bit 'all over the place' because we're trying to catch up with each girl as best we can. All episodes after this will not flow this way. They will each focus more on a couple of girls, and/or a major event. Dates, 'getting to know them' type conversations, and exploring their 'powers' more. I had many people tell me they wanted to see more of that and I do too. So I've written in some interesting ways that will happen. The girls are getting bored. They need some activities (besides lewd stuff of course).

Where the hell is Last Human? Where can I download it? You can't download it yet because I haven't released anything yet. I've been asked about the download a zillion times. I have no idea why or how people are misunderstanding this. I've been pretty clear about LH. But to answer the first question... After this Serenity C2 E1 release, I'm going to work on LH's first release. However, release time will be 60 days to maybe 90 days because the first one is going to have a lot of content. It isn't written anything like Serenity. It has a lot more details. LH is not for the ones just looking for sex scenes. It is for those who enjoy a good sci-fi story with sexy bits scattered. You may see some lewd scenes in the first release, but no sex yet. This isn't a "magic jizz" game. Anyway, as I said... I'll be working on LH after this release. Beyond that, we'll see what happens depending on how well LH is received. Last Human is a much more serious project for me. Serenity will be my "break" in between those releases.

Why don't you have a patron goal setup like other devs on patreon? Because I really had no idea that I would have much of a following to be honest. I'm only 8 years from being able to retire from my full-time job so quitting my job isn't a smart move for me. If I was about 20 years younger, it might be different. I wish I could do that though. So, I have no goal to reach really. With that said, I would love to see 500 patrons someday. But not because of the money... but because that many people love my work enough to actually give me money. The money has definitely helped me keep going though, make no mistake. Without it, I couldn't license the good music I put into Serenity (and LH). I couldn't support the modders and devs who constantly help me with stuff. And I couldn't just go out and buy PC upgrades as needed. All money I make here first gets reinvested back into Serenity and the modders and devs community by supporting them. Without modders, most of us wouldn't be doing this. Only after all of that do I actually use any of it for myself. Currently, that isn't much in the end, but it has been slowly growing since I began.

Will you ever bring back your SubscribeStar page? Yes. In fact, I want to have that back up and working for the first release of LH. At that point, I'm going to revamp all of my sites. Patreon tiers, SS tiers, and update/change those around some. There will not be anything on SS that isn't also on Patreon. So it will come down to subscriber preference - you can sub on Patreon or SS for the same amount and same features. I am also going to do something a bit different on my itch.io page.

Why isn't Serenity higher up/more popular on F95 or other sites? Why indeed? Haha! Seriously though, you can make it more popular by spreading the word. Sending me some good reviews, likes, etc.. But, I understand Serenity may not be up there with some of those bigger games. It's kinetic, has no 'father/daughter' or 'mother/son' stuff, and zero 'young' stuff. I have to use strange words in this post because Patreon won't let you type what you want. But I won't write that kind of content and they are usually the most popular, unfortunately. Plus, Serenity was my first try at this stuff. I didn't expect it to be "the best" right off. It was downright horrible during those first few releases looking back on it. Anyway, go like Serenity, follow me, give some good reviews and spread the word. You guys control how popular it is. ;) So, go forth and conquer! :)

Will you ever do a game without Nekos? WHATTT???!!! Are you inSANE?! LMAO... Come on, who doesn't love a sexy cat girl? In all honesty, I do have a few storylines started that have nothing to do with Nekos, magic, or sci-fi. At the end of Serenity Chapter 2, I may look at those notes and outlines... See if I can make something nice from them. Possibly even make an actual "game" with choices and consequences.

When will Serenity end? Yeah, speaking of that, I'm thinking Chapter 2 will be the end of it, at least for a while. Last Human is going to take a lot more energy so it will be really hard to work on both after a while. It just depends on what happens down the road. Anything could happen. If LH really takes off, Serenity C2 may get much slower updates (but it will NEVER be abandoned). Supply and demand, boys and girls. If the demand leans more towards LH, then it will take priority. But Serenity will definitely be completed and have an ending. I really want a pregnancy ending for it. I want to give you the choice (at the end) to choose a Queen, marry her, and make babies - or, the harem ending of course. I have this vision of making small children characters that look like Kat, Rin, Morgan, or any of the other girls. It would be a huge task to create so many branches but well worth it I think. Like I said, that is just an idea.

Your posts are entirely too fucking long. Just. Stop. Typing! I know guys. I have a lot to say. And some may not read every word, but I know there are some that appreciate all of the info I can give them, so I do it.

And on that note, I'll end the post here! Look for release announcements coming very soon; like sometime this week. We should see the first release for Fade Goddess tier and above on or before Friday the 29th.

A book transports you to an island of nekos and romance, your own paradise.

The I-word fetish is that popular nowdays? I mean, I've played a few games myself but didn't know other people were ONLY into that. Some say the pandemic plays a big part in this sudden appreciation of the I-word thing, others say that it is purely society itself changing (at least in it's outer circles) but what do I know about that.

About LH on Steam... I think I can support that idea, even if it means not playing the game. A few game devs who put their games on Steam ended up having to price the game on Itch.io as well (ex: My New Memories, by Killer himself), but not all of them which is strange. You deserve the support, man. But at the end of the day, it's up to you and the "logistics" of a devs life.

Also, stop make me thrilled for Serenity! I miss this game!

As it turns out, none of my games will ever be on Steam because of the graphics engine used to create them. Killer's game (My New Memories) is made with Daz and that one is safe. Mine is made with HS2 which apparently there is some legal thing that won't allow us to "sell" those games on Steam. Basically, I am working for 'donations' and not really selling Serenity (or LH for that matter) since 2 weeks after beta, I am releasing it free to the public anyway. So, that's that. No Steam to worry about. Actually kinda relieved to be honest.

-_- Why is everyone complaining about long posts? I mean I don't have a problem with it since long posts means the game it still developing and it also means you put a lot of effort to it (no offense to those who posts are short and straight to the point)

anyways See you in the latest chapter (might give a review about as soon as the game is open to the public.

Thank you as always, ...Fire